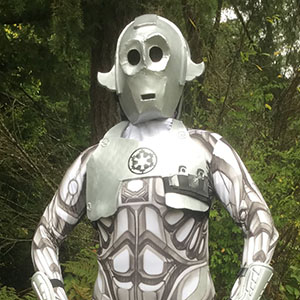 Droids are mechanical beings often possessing artificial intelligence. They are used in a variety of roles and environments. Droids are also used in fields that require extensive specialization and knowledge, such as medical droids, astromech droids, and battle droids.

Droids are obedient, rugged, and expandable. This lack of autonomy is both an asset and a weakness - an asset in terms of obedience and control, but a massive drawback in terms of effectiveness. While many droids are subservient to an organic, some are completely independent, free-thinking individuals. Droid names are an arrangement of numbers and letters, such as C3-PO, but independent droids may use organic sounding nicknames.

You can play any humanoid droid that you can portray with a realistic costume within the 360 Degree illusion rule. R2 units and shadow costumes (where you wear black underneath thinned costume pieces) are allowed only with Staff approval before an event.

How to Make a Droid Costume

Force Points for a Droid is referred to as ‘Power’ In-Game. Otherwise, Droids cannot use Force Skills, Force Techniques, or Relics.