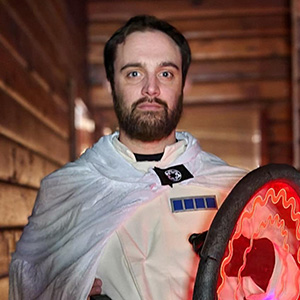 Humans are the galaxy's most numerous and politically dominant sentient species with millions of major and minor colonies galaxy-wide. Believed to have originated on the galactic capital of Coruscant, humans can be found anywhere engaged in many different pursuits: spacers, mercenaries, smugglers, merchants, soldiers, assassins, farmers, crime lords, laborers, and many others, including Jedi and Sith. Since Humans are the most common sentient species, they are considered the average to which the biology, psychology, and culture of other species are compared.

Near-Humans are species similar to Humans and possess no ability, though some are known to have minor physical abilities such as breathing underwater. Near-Humans often don't look like a normal Human. For example, some may have blue skin or multiple limbs.

Normal Humans have no makeup requirements. Near-Humans require a realistic mask/makeup that best represents the species. The only Near-Humans allowed in the game are listed below.

Humans and Near-Humans do not possess abilities.

Humans are living beings and as such, the Force flows through them. Even those that are not Force-sensitive uses the Force to accomplish feats through the use of Skills and Techniques.

If a Near-Human you are looking for is not on the approved list below, than the species cannot be played. Each and every sentient Near-Human listed on the Star Wars wiki has been examined by Staff.