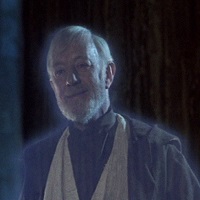 YOUR CHARACTER CANNOT BEGIN AS A GHOST. A Force Ghost is the spirit of a Force-user who learned the Force Ghost Technique before they died. Both Dark and Light side Force-users can become a Ghost, yet do so for different reasons. Light Side spirits tend to act as mentors to the future generations. Many tend to assist their living children and grandchildren who have shown abilities in the Force. Dark Side spirits are manifestations of their hate and anger fueled hotter by their death. In an attempt to cheat death, Dark spirits always seeks for a way to return to the living and exist as they did in life. Dark spirits can teach the ways of the Force if they wish or are otherwise coerced.

Ghosts appear as they did when they died, including signs of how they died. All Ghosts are pale and gaunt, requiring makeup to represent this.

Ghosts are manifestations of the Force, but are limited in how they can use it.